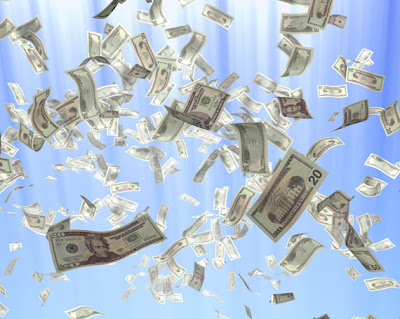 What follows is another "back to the future - 2010" post and is written in response to a timely question asked by fellow blogger Bartacus:

Q: One comment I hear a lot is that poorly performing schools are simply the result of poor funding, with the amount of money spent per student (out of the local tax base) correlating directly to student performance. Has that been your experience?

Last week, a historic lawsuit was filed against the state of California. This lawsuit challenges the constitutionality of California's education funding system. You can read more about the suit by clicking on ACSA, the website for the Association of California School Administrators.

Before I proceed any further, a disclaimer: My background is not in school finance, but I can share with you some of my observations on how money is allocated and spent at the school site and district level.

How are public schools funded in the U.S.? While specific methods of funding public education vary from state to state, the baseline budget for schools is generally determined by revenue from real estate taxes. Some states allow for a community's taxes to go directly to school districts within its boundaries. Other states pool all of the money collected statewide and distribute it equally (more or less) across the state. California uses this second option.

When you hear of 'state funding' for education, this usually means the baseline amount funded per student, aka the per pupil allocation that makes up the general fund.

The short answer is that school finance is complicated. The long answer is that it can be so complicated that schools and districts have to be in the know and proactive about procuring additional funding for students. Not all schools and school-districts are knowledgeable or effective at applying for and securing these supplemental funds. This can lead to big differences in the resources available to individual schools and school districts even in a state like California that seeks to distribute its funds equitably across school districts.

Here's a menu of options for schools and school-districts seeking more funds for their schools:

Baseline funding from the state, or the "general fund" is unrestricted and usually pays for teachers, staff, instructional materials, building maintenance and anything else that a district needs to operate. This budget is calculated using the average daily attendance (ADA) for each student and the district receives x number of dollars per student. When we hear of teacher layoffs because of funding issues, it's because the general fund is low or is operating in the red.

In addition to unrestricted general funds, school and districts can receive certain restricted or "categorical" funding.

Since the "categorical" funds need to be spent for specific purposes, schools and districts usually can't use the money for full time teacher and staff salaries. Categorical funding can come in the form of additional state or federal money. Some examples of supplemental sources of funding are federal Title One funds for schools where a certain percent of students live below the poverty line; funding for English Learners; Migrant Education; After-School education; and Economic Impact Aid (EIA). Other sources may include state block grants from lottery tax revenue, local bond measures, federal stimulus funding (ARRA), School Improvement Grants (SIG) and a multitude of other program grants. There are still other sources of funding like federal Race to the Top grants that only individual states can apply for.

In order to be considered for any or all of these sources of funding, a school or district usually has a person, an office or department that takes care of applying for these programs. If a school does not apply, they do not receive the funds. Not all schools and school districts apply. When you compare schools and districts across the country, some are more "in the know", "on the ball" and politically connected than others, resulting in a hit or miss desegregation of available resources for children.

Put another way, some schools and school districts have less 'social capital' and are less effective at drawing in these supplemental sources of funds.

To further complicate matters, some public schools form business partnerships with local companies and other community organizations. They are able to solicit and secure additional funding and in some cases, recruit volunteers who work at the school site. Other schools directly raise funds from the parent population. From first hand experience, I know one affluent school district in my area where each school has a non-profit education organization run by parents and devoted to raising funds for the schools. One elementary school receives $400,000 per school year from the fund and pays for teacher assistants, Science Lab and Technology teachers and other priorities on the school's wishlist. In effect this is a local, elective tax.

So to answer Bartucus' question - it's complicated. While state per pupil allocations may be inequitable, I also have concerns about how additional funding is secured and spent. What the general public is presented with in the media doesn't always tell the entire story.