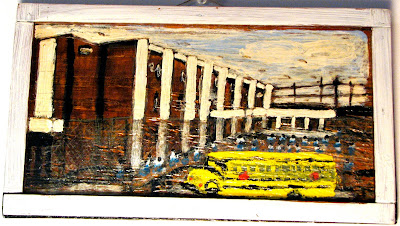 I was surprised to find someone else in the kitchen. Mr. Thornabar introduced me to a woman who was boiling water for tea in a pot on the stove. She was his sister who lived with him and they seemed to be about the same age. The kitchen felt very warm and I realized that the oven door was deliberately left open. They explained that the oven was the only source of heat for the house.

As Mr. Thornabar and I sat down to talk at the kitchen table, his sister excused herself and walked toward an armchair in the next room. He seemed happy to have a visitor and very open to sharing his story which included a career in the Navy and a later disability that left him essentially homebound. It was at that time he took up painting and when he could not afford canvas or artist paint, he used old boards and house paint mixed with tints. When he ran out of boards, he would paint over them and when he ran out of those, he painted on the walls.

The subjects of his work ranged from famous New Orleans landmarks, like St. Louis Cathedral, the now infamous New Orleans Superdome, Streetcars, but also cartoon characters, Santa Claus and the Easter Bunny. In his house we were surrounded by portraits civil rights leaders alongside Zulu kings and queens and Mardi Gras Indians (see links). These paintings were hung beside images of people in the community going about their daily lives. He even painted a picture of the school where I worked, with a yellow school bus waiting out front.

While talking, my eye focused on the painting of our school, so I asked about it and if he sold his work. He replied, "Yes", and when I inquired about the price, he said, "Seven dollars." This seemed like a ridiculously low price to me, but given his small income, he seemed to think that it was fair. Not sure how to negotiate upward, I offered him thirty dollars and he accepted.

I worked in the Calliope for three years and purchased several paintings from Mr. Thornabar during that time. What made him even happier was that I was able show off his art to more buyers. As the demand went up, he was able to raise his prices and took pride in being a working artist.

After leaving the Calliope, I lost touch with Mr. Thornabar. When I returned to see him in 2002, I was surprised to be greeted by his sister at the door. She was happy to see me, but sad to tell me that he had passed away from kidney disease a few months earlier. She now lived in the house alone.

While Mr. Thornabar never had formal training or showed in a museum, his form of art, like Grandma Moses', could be categorized as "outsider art". The impact he made as an artist was in the genuine way he documented the everyday events of the community and and found beauty, elegance, warmth and grace in a place that most people found terrifying. I would estimate that his public stoop paintings were viewed by several thousand people over the years.