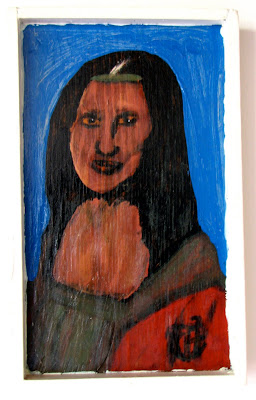 There are several famous musicians who were brought up in the Calliope. Among those you might have heard of are the Neville brothers, and rappers Master P, C-Murder, and Lil Romeo. I'd like introduce you to a visual artist who I had the great fortune of knowing. While I have not revealed real names of school community members thus far, Lories Thornabar, is an exception because his talent deserves to be shared and remembered.

One boundary edge of our school in the Calliope was lined with single family homes and one of these homes sat across the street from our playground fence where students assembled. Every morning, the resident, an African American gentleman in his mid sixties, would sit on the top step of his stoop with a large painting propped up to face the street. The themes of his paintings would change as the weeks would go by, and each day, both the children and their families would check to see what he had in store for them. Mr. Thornabar would greet everyone who passed by on the way to school with a smile and a positive affirmation. It was a nice start to our mornings.

While I would wave back at Mr. Thornabar every day, I also wondered about his story. The school staff had apparently known him for years, but only across the fence. After a few months, I decided to go over there and introduce myself, but I ended up getting a lot more than I had bargained for.

Mr. Thornabar answered the door in his usual jovial manner and invited me in to talk. Just as an aside, my father once told me that I was a child who was likely to end up on a milk carton because I loved talking to strangers. In any case, I accepted his invitation and stepped inside and this was where I was met by the most extraordinary space, decorated with paintings from floor to ceiling. These works of art were created on old scrap pieces of wood and on the actual walls themselves. The style of his house was a typical New Orleans "shotgun" with high ceilings and where each room was connected to the other going straight back from the front door. As we walked through each of the rooms to get to the kitchen, I was enveloped in art, history and community.