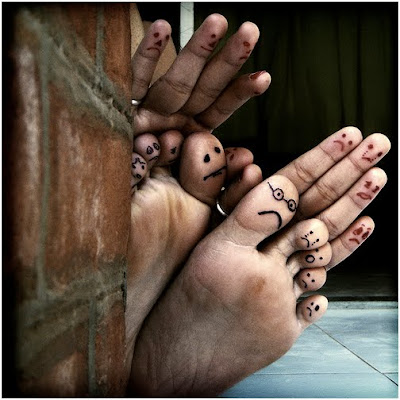 The title of this photo by A. Maheshwari best sums up the emotional climate in Mrs. Prentiss' classroom. I want to preface this post by saying that Mrs. Prentiss was the exception at the school. The other teachers that I worked with were, for the most part, caring professionals. We all, at different times, made attempts to rescue students out of her room, if only for a short while. Looking back now, I am struck that Mrs. Prentiss was enabled for so long and would be for her entire thirty year career.

It's still confusing for me to write about her. On the one hand, she was my mentor and was a great support to me for my first years. I liked her as a person. She had a sharp wit and a gripping life story which included overcoming the abject poverty of her childhood, and as an adult, surviving breast cancer. She was a wife and a doting mother. Her only child, a daughter, at that time was graduating from medical school. She was well traveled and a phenomenal cook.

On the other hand, to most of her students, Mrs. Prentiss was an abusive monster.

One of her favorite forms of torture was punishing her students (especially boys) by having them stand in the back of the classroom for the entire day. This meant that they would miss lunch and would not be allowed restroom breaks. I remember incidents where standing students would urinate on themselves because they could not hold on any longer. I also remember an incident that I debated whether to write about, and then decided to include to illustrate the degree of humiliation that some of Mrs. Prentiss students had to endure.

I remember a time when a male student was left standing, and by the end of the day was moving his legs from side to side indicating that he needed to use the restroom. As the pressure to go grew stronger, he held on to his crotch area to further indicate the urgency. Mrs. Prentiss, came up to him and in front of the entire class said,

"Boy, what do you think? You are a man now? Baby.... Starch couldn't make that string between your legs hard!"

He was humiliated and she was surprised to see me standing in the doorway. I had the student go to the restroom and he ran from the class.

Mrs. Prentiss had a way with words and she used them creatively and daily to remind her students where they came from and how without her, they would be destined to "run the streets like their parents."

Beyond the daily emotional abuse, I recall a couple of times where she took her students into the restroom for their punishment. The school had a history of corporal punishment and I learned that the staff had only decided to stop the practice where the new principal came on board (in 1996) . I don't think Mrs. Prentiss stopped and I would hear her warn her students how she would "tear them up."